While playing with parts of Chinese Characters or other words,
the oneireme, the latent content of a dream behind its manifest content
reveals the dreamer’s secret thoughts (subconscious).

About the author
He obtained his PhD in 1968, at CERN, the European Centre for Nuclear Research in Geneva.
Since then he has been active in a wide spectrum of research activities ranging from
high tech to semiology.


"I, Chinese,  I understood,  in 2002,  that the inconscious of all human beings is
structured just as Chinese writing...and an interpretation of dream is analogous
to an analysis of Chinese characters"  Huo Datong  (psychoanalyst  in  Chengdu)

The Memories of the Jade Box revisited…

Premonition, the too long prevailing obscurantist interpretation
of "sooth-dreaming" is discarded without appeal.
In its place, a rational analysis of the mental process involved is spelt out.
At night, the dreamer disguises with his best language skills
the coveted resolution to his sorrows of the previous day.
The next morning, though he still does not dare, alone by himself,
to openly confront the latent content of his dream,
he will unconsciously direct his neighbours, his "oneirocritics"
in a kind of drama,
ending up with the revelation of the concealed meaning of it.

We first offer the visit of a collection of ancients dreams...
just select one of 13 the active hyperlink-icons
of ancient 梦 dream....and click upon it

The mathematician Roger PENROSE has been the first to postulate
The New Emperors´ Mind, 1990, p. 532, Éd. Vintage
that there "seems to be something non-algorithmic about our conscious thinking"
which represents the subtle participation of our right cerebral hemisphere
upon the activity of the left hemisphere.
This bold hypothesis inspires another, symmetrical one,
that of the quasi-algorithmic structure the language lays down
upon our unconscious mind, and therefore of our dreams.

In our sleep, we are impelled to brood over our most recent worries,
and to "play upon words" in order to enhance the coveted, but inadmissible issues,
which, when awake the next morning, inevitably puzzle our conscious, self-declared-rational mind.

As George DUBAL formulated it in Rêves de trains (1974),
"The general forgetting of dreams has the same cause
as the one of their production;
censorship of desires".

Language has been invented in order to channel our sensations, emotions and feelings.
My father liked to remind me that, up to the age of two, I used to cry every evening,
when I was put to bed and hugged as he was leaving my room.
But the day I succeeded, by a "daddy leaves"
to put into words the event,
to ward off its violence, my tears stopped.

Once humankind invented speech, the unconscious mind found itself
captive of this very language which structures it.
This stereotyped mode of thinking is particularly explicit in the absence of
censorship, such as in the case in our dreams.

The encoding of our dreams calls for the most appropriate keyword of our language.
Algorithmic Oneirocriticism has to disentangle rebus
with ciphers, homophones, or even Chinese ideograms.

During the course of a psycho-analysis, Rosemary dreamt that
she was going alone to a party at some friends’.
After a while she decided to call her husband to join her.
The unexpected shape of the phone-booth reminded her of her own sex.
She began to dial the number which was ending with "14", but, despite repeated efforts,
she did not succeeded to dial the number to the end.

Rosemary was suffering under her husband’s misunderstanding for her femininity.
Despite her attempts to entice him (the invitation to join her at the party),
her femininity (the # 14, i.e., the 14th day of her menstrual cycle) does not reach him.

Greta, dealing with financial worries, dreamt of one of her hated rich uncles.
She went with him in his woodshed where he wanted to give her
some trunks covered with moss ("moos" in German means also "dough", i.e.: money).
This is a prototype of a compensatory dream: on an apparently anodyne way,
what one does not dare to wish while being awake is expressed.

Out of the balcony

Lucien, at time of his psychoanalysis by George Dubal,
had a relationship with his housekeeper, Françoise,
which he thought to be disapproved by his analyst.
He dreamt Françoise was pouring a pot of cream
out "of the balcony" ( in French du balcon) into the street.
The cream symbolises the outcome of his liaison, while the frustration of not being understood
is expressed by the unceremonious: Dubal con (in English, Dubal is an asshole) !

The rebus of the bear

Liselotte, at time of her analysis, dreamt of
a white bear climbing up a big stone.
Though in those days her analyst was presenting himself only as Urs,
his second first name, Peter  had been discovered
by Liselotte on an old payment form which Urs Peter had once given her.
Therefore, for this Bernese lady (Bär, bear, is the coat of arms of Bern),
Urs symbolises the bear (in Latin ursus), and
Peter  (in Latin Petrus), the stone on which one builds....her analysis.

The van with tree plants

Xiaomei, at time of his psychoanalysis by Huo Datong
dreamt she walked on a broad avenue,
when a van, loaded with a lot of tree plants, appeared suddenly.
After having told her dream, Xiaomei realized that the
ideograms che (car, van) & shu (tree plants)

form Cheshu, her lover's first name  !
This was this extramarital relationship which perturbed her,
and about which she did not dare talk to her analyst.

Pierre was just at the beginning a relationship with Trixi , but it seemingly
was going cold. While Pierre was worried about not knowing how to "break the ice",
he dreamt that his glasses fell onto the floor which was made of white tiles,
and shattered into a star shape.
This vision provided him with a feeling of deep relief,
and soon afterward Trixi appeared smiling...
Glas, in German (the mother tongue of Trixi), in English glass,
has, in French (the mother tongue of Pierre), an homophone:
glace (in English Ice)...the ice which should be broken. 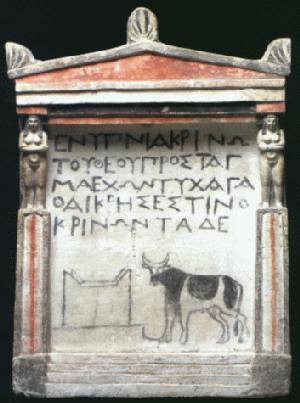 After having besieged Tyre for seven months,
from February till August 332 Before Common Era
ALEXANDER the Great decided one day to raise the siege.
He believed he had lost all chances of succeeding....
...and the next night he dreamt .....

In Napata, in 665 Before Common Era,
Tanutamani,  on the verge to follow on the throne
his cousin Taharqo, who let the Assyrians rule over Lower Egypt.
had a dream...

The "inadmissible" content of dreams,
such as the one of Tanutamani or Alexander,
will be often perceived - at first glance - as "premonitory".
Nevertheless, a closer look forces us to admit that the encoding of our dreams
is only the first act of an unconscious directing, where,
in a second act, we trust others with the responsibility to reveal to us its meaning.

Among the so-called premonitory dreams, a large category is the one with dreams of power:
there, the acquisition of phallic symbols (such as a dot on the forehead, or tufts of hair on the chin)
can alternate with the castration of the father or of one of his representations, such as the ram.
Another category is the one of compensatory dreams: an intense frustration can force us
to find an issue, at least when dreaming, to compensate hard reality by something less depressing.
Inversely, one man, ready to succeed in his action, but lacking in self-confidence,
manages to torture himself with dreams full of unpalatable scenes, simulating a failure.
The oncoming success is nevertheless there, hidden in the latent content of the dream.
When one dreams the worst, it is always that one still hopes
- at least unconsciously - to succeed or to be cured.

The particular interest of the Chinese language is to offer to the dreamers
not only the opportunity to play with words,
but also with the pictures out of which are built the Chinese ideograms.
This oneiric game should not be confused with the etymology of the sinograms.

Ancient Chinese dreams were compiled in the Yùxiájì (Memories of the Jade box),
a work initiated by Xu Zhen (born in 239) and later enlarged several times.
Those sinogram-based dream-omens were
translated by G. SOULIE DE MORANT and annotated by Marie BONAPARTE,
and published as Les rêves étudiés par les Chinois, in the
Revue française de psychanalyse, n°4, 1927, pp.733-749, Éd.Doin
The present selection of those sinographic dreams is based on the 1993 re-edition
of the Yùxiájì as a pocket-book by Ed. Haiyang, Beijing, ISBN-5027-1607-9/E20. 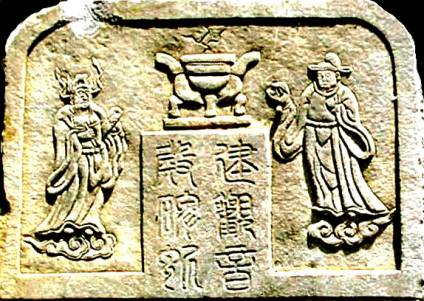 The psychoanalytic interest of sinograms
has now its own web-site http://www.lacanchine.com/
The symbolic wealth at the disposal of the Chinese scholar
(the one who masters 10'000 characters. Ten thousand is the unit for large numbers,
e.g., to wish long life to someone is to wish him 10'000 years)
might be thought to be doomed to disappear,
with the phonetic swallowing up of ideography.
On the Internet - fortunately for the dreamers - iconography seems to take over, and
the dream of the van with tree plants discussed above demonstrates,
that the association of phonetic and sinograms has still a promising future.