Lü Méng-zhèng emerged from a very rich and powerful family.
They used their vassals to launch campaigns against their neighbours,
used up their resources and became very poor.
Lü Méng-zhèng was living in a cottage in ruins.
One day, while he was on his way to the temple to implore the spirits,
he found a golden bar weighing one hundred ounces.
He gave it back to the one who had lost it without keeping back anything.
The same evening, he dreamt that a spirit planted three tufts of hair on his chin. 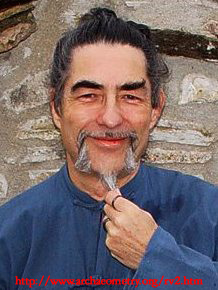 The character can has precisely 3 hairs in its lowest part.
He became Counsellor (and minister of the Song Empire from 990 to 1015),
Compensation for a lost fortune and a reward for honesty.