A well preserved naturally mummified human head has been found in 1936
with two other mummies at La Cueva de las Momias, level 1A,
(misleadingly named Inca Cueva IV due to its proximity to the Camino de los Incas)
at 3680 m.o.s.l., in the Quebrada of Chulin (Prov.of Jujuy, Argentina)
by Justiniano TORRES APARICIO, MD and folkmusic composer.
His "Clavelito blanco" is interpreted by Thomas LIPAN
at url  http://www.archaeometry.org/lipan.mp3  (188ko) .
A sample of temporal skin from the head of Chulina
has been radiocarbon dated at the AMS Radiocarbon Laboratory
of the Federal Polytechnic Institute in Zürich. The resulting calibrated
age of Chulina  is 6'080 ± 100 years (within 82% probability).
Compared with Ötzi (the paleoalpine mummy found in Ötztal),
the age of this paleoandean head is 5'260 ± 50 years BP,
i.e., older by 724 ± 53 years BP.
The Cave of the Mummies has been decorated prior to sheltering the mummies.
Those results have been presented at the XVth World Congress
UISPP 2006, Lisbon, see Proceed. Session C04, Vol 37, pp.111-114

The three mummies found by J. TORRES APARICIO
were  desiccated naturally, and therefore suitable for radiocarbon dating.
(let us remind here that radiocarbon dating of  embalmed
Egyptians mummies is meaningless).

For this study, was available a piece of temporal
skin of  about 3 cm2 area and of a weight of 120 mg. 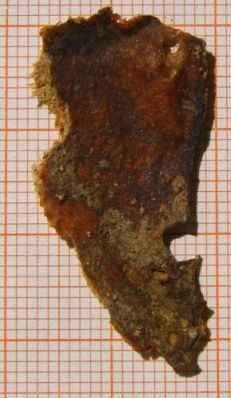 This sample was been carefully collected at the Museo J. TORRES APARICIO
in Humahuaca (Prov. Jujuy, Argentina), on the "Cabeza J.T.A.-240" 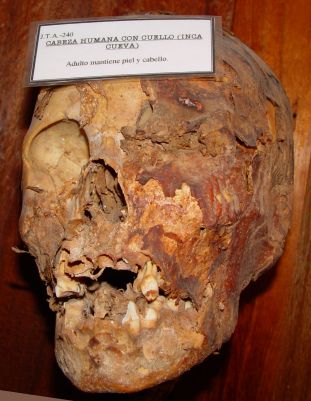 Thanks to the highly appreciated support of
George BONANI & Irka HAJDAS
from the AMS Radiocarbon Laboratory of the Federal Polytechnic Institute in Zürich,
the skin sample of JTA-240,
after having been thoroughly degreased and washed from contaminants,
has been submitted to the standard ETH 14C-AMS dating method,
(which by the way has been applied for Ötzi )
and results released on July, 8th, 2005 as ETH-30630.

Discussion of the results

The initial name of the site: Inca Cueva # 4,
is inappropriate as it has only been occupied by palaeoamericans
between  10 and  4 thousands years Before Common Era.
We renamed it "La Cueva de las Momias" 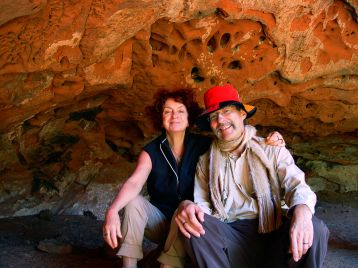 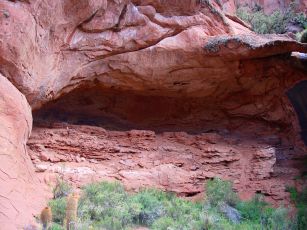 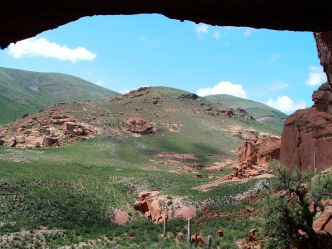 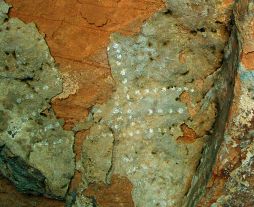 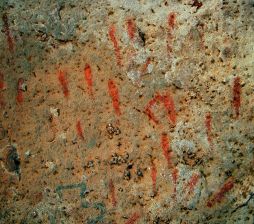 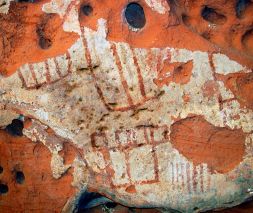 At Humahuaca (Prov. Jujuy, Argentina), the collection of late
Justiniano TORRES APARICIO,
was transformed into the Museo J. TORRES APARICIO
In addition to the mummified head of Chulina,
the Museum present two complete mummies,
in particular the one the inventor named Rosalia: 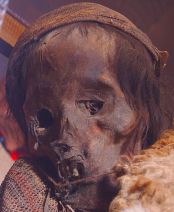 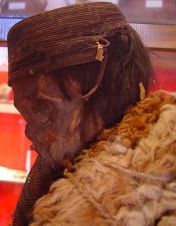 This mummy is the naturally dessicated remains
of a woman, 17 to 20 years old.

The fez of Rosalia is of a remarkable finishing. 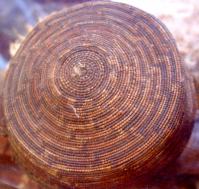 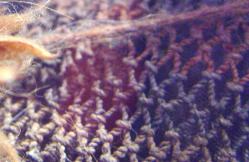 As no logbook of the excavations has been found so far,
radiodating of samples of the fez and manta,
would provide helpful data....

The last mummy is the one of a child, we named Chulinita.

The radiodating of the skin of Chulina in 2005
comforts the wood samples radiodatings of 1986 and 1995,
to promote Rosalia & Chulinita
for the title of the world oldest natural mummies.
Ötzi  died 5'235 ± 120 calibrated-years,
while Rosalia & Chulinita
lived in all likelihood 6'000 calibrated-years ago.
The undisturbed state of the paintings of the Cave of the Mummies
implies that this RockArt is at least 6000 years old.

We would like to thank here Mrs. Alicia TORRES,
the owner and director of the Museo TORRES,
in Humahuaca (Jujuy, Argentina)
who authorized this study, and
Ms. Candelaria TORRES APARICIO, the grand daughter of Dr. J. TORRES APARICIO
to have lately express her interest in our results.