At the UISPP-CISENP Colloquium in Paris on 22-23 Octobre 2007
our most recent communication on this topic was presented in French
under the title "L'expression par graphèmes iconiques"
at url   http://www.archaeometry.org/graphemes.pdf

At the 2° Taller Arte Rupestre, at La Habana, April 13-23 2004
our very first communication on this topic was presented in Spanish
under the title "Grafemas iconicas, entre palabras y escritura"
at url  http://www.archaeometry.org/grafemas.htm,

How does a language relate to writing ?
Could Rock Art help us to understand how this gap is bridged ?

The graphical representation of phonemes reflects
the way the brain puts into words or receives a message.
The complexity of the problem appears once both cerebrals hemispheres
are taken into account :  they are hosting the centres of different activities.
Let us summarize the lateralization of some cerebral activities, relevant to our topic:

To associate Images to Words, requires therefore to trigger both hemispheres !

Iconical graphemes are stereotyped graphical elements, used into a composition
to represent something extraneous to their own symbolic value. 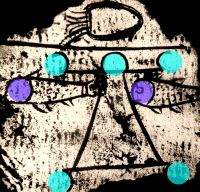 Grapheme # A : Cupule (La Gardette/ France; Helanshan/ China; Bolivia, Cartago/Tunisia).
The Cup-mark grapheme has been used indistinctly to represent the eyes
and the nose, or,  as terminator for the limbs or the hair, even the head
of Goddess Tanit or the one of two fishes (probably using the same coin as grapheme's caliber).
In the "INTI" blanket design this grapheme appears 18 times in
the composite figure of the Sun. Let us note, here, how the nature
of  the support modifies, from round to square, the shape of the grapheme. 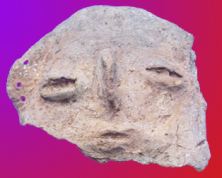 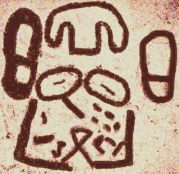 Grapheme # B : Coffee bean (Banes/ Cuba)
The grapheme Grano de café has been used indifferently to represent eyes or mouth,
while only for the eyes in the painting (let note the feet representin,g the ears andf
the hallucinogenic mushroom, the forehead) .

This engraving of the so-called "Chief of tribe" shows how, in a composition,
the use of an iconical grapheme adds a symbolic value for a pastoral society.
It is interesting that precisely this grapheme has played a key role
in the genesis of our alphabet, giving its shape to letter A.

Before reviewing further iconical graphemes, let us first discuss the links between language and writing.
Such links could be homophonic, homographic, or acrophonic

There, associated to one sound, exist at least two spellings, e.g.:

i) in Anglo-american, some alpha-numerical graphemes are used, e.g.:
"4u", instead of for you, or
"Xing" instead of CROSSing.
Those unconventional spellings do not add significant symbolic values.

ii) in French, hyperlinks (electronic addresses) are now frequently enhanced with
the grapheme arrobas, e.g., a pseudo hidden behind cont@ct.
The grapheme "K7", instead of video-cassette, is widely used in marketing.
Recently, the TV invited, to take part to a Forum about the Future,
one hundred and nine pupils, i.e.
"109" which is the homophone of sang neuf (fresh blood).

Another homophone is "la mer" instead of la mère.
This metaphorical link is nicely exhibited in the water-painting of a dream,
with the face of the painter's mother appearing at the surface of the sea. 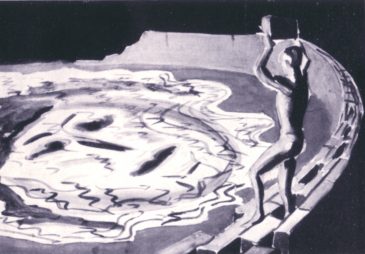 There, similar ideograms are pronounced differently.
An interesting case, related to our previous example, is the link between

the Chinese character for "mother" (pronounced,  "mu3" in pinyin),
and the very similar one (with "3 water wavelets" on the left), meaning "sea" (pronounced "hai3").

The acrophonic principle consists in using, as "letter", the graphical sign depicting an entity
whose noun begins with the phoneme to be represented

In Egyptian writing, e.g. the hieroglyphic for lion, called "Lou"
will be used to write names phonetically, i.e., in ALEXANDER.
The choice of this particular iconical grapheme, to write the sound "L"
in names of kings represent an added symbolic value.
In our opinion, the "Name Age" might have started as late as 6'000 years ago.

Mn                  à
n
The first written testimony of the Name Age is the "cartouche" containing the phonogram
of the Egyptian 1st Dynasty King MENA, dated 5'150 Before Present. It is though difficult
to assert that MENA is already a personal name or still only the noun of a social role.

In alphabetic writing, the acrophonic link merges to etymological roots.
The above mentioned "mother-sea" relationship gives,

Review of some iconical graphemes :

Grapheme # D : v-shape (Corsica / FR; Tafi del Valle/ Tucuman, AR)
This grapheme is used 12 times on the Corsican stele,
4 times (2X on each side) on one Tucuman statue menhir,
while, on another, it appears alone. 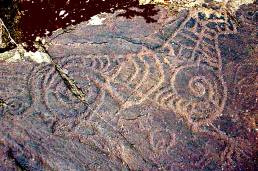 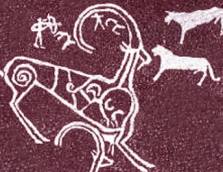 Grapheme # E : Spiral (Helanshan/ China;  Siberia)
This "dynamical" grapheme depicts well the muscular strength of the tiger or... of its prey. 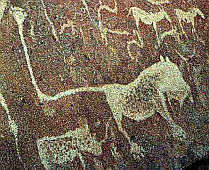 Grapheme # G : Dagger & Halberd  (Valcamonica/ Italy)
Typical of Chalcolihic Age, this dagger sign is used to represent head & trunk.
In 1978, at the Capitello dei due pini, E. Anati noted that, while the head is represented by
an antler-necklace, the halberds in leaves-shape seem to represent the lower limbs.

Grapheme # H : Human Face (Helanshan/ China; Toro Muerto/ Peru)
While the pubic triangle icon specifies the sex of the insect-woman of Helanshan,
the secondary face suggests "pregnancy".
In 1978, in Toro Muerto, A. Núñez Jiménez noted that
the diamond-shaped legs and  sex seem to represent a face.. 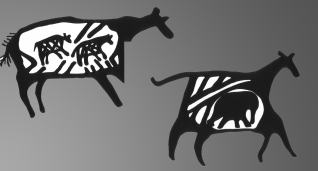 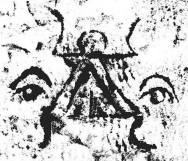 Grapheme # L:  Hand (Carthage/ Tunisia;  Coni /1983))
In the composition of a face one could find even a "right" blessing hand
as a substitute for the nose, while for the head of a guitar,
the Cuban artist Coni used a "left" hand. 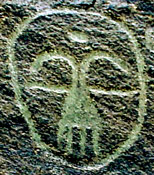 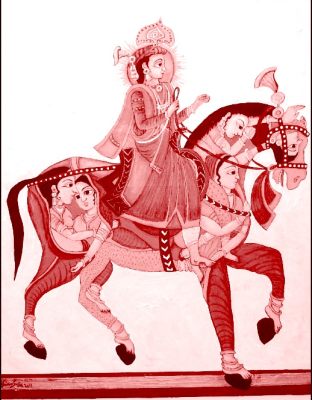 Grapheme # M : Human Body (Helanshan/Ninxia, PRC; Giuseppe Arcimboldo 1578; Krishna; Man Ray/ 1924)
The composed faces of the Neolithic engravings, or of
Eva and the Apple illustrate the subtle use of iconical grapheme of human body,
while the outlines of the The violon d'Ingres suits the taste of the 20th century.

Grapheme # O :  Coastline of Africa (Alfredo Rostgaard / 1972;   Bjorn Reiner/ 2004)
Outlining the  portrait of Patrice Lumumba, this grapheme illustrates how powerful
can be this metaphorical language inherited from Neolithic Rock Art.
The sun-glasses of the Minister of Foreign Affairs offer, thanks to Reiner,
a new vision upon the South-African Woman

Further pluridisciplinary studies are needed to consolidate our hypothesis
on the role of iconical graphemes in the emergence of writing.
Concerning  basic (non iconical) graphemes let us note that
at the 25th Valcamonica Symposium, (Proc.pp. 367-372), Kalle Sognnes
presented a communication entitled "Deconstructing elks",
analysing Rock art engravings from a new non-stylistic perspective.