Foot Images in Rock Art...
...the crucial step toward Writing !

The thorn in the foot of this delicate young Etruscan 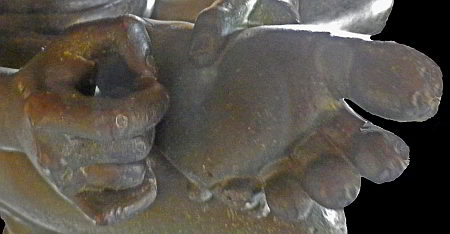 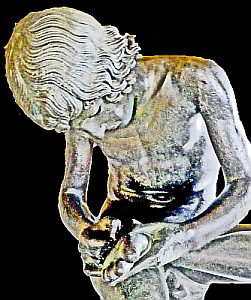 reminds us that the invention of sandals
is one of the greatest step forwards achieved by humankind. 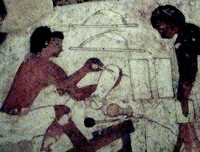 At foreplay to this last communication of session #5, let’s first
Watch Our Step
& have a careful look at
how an iconic language works. 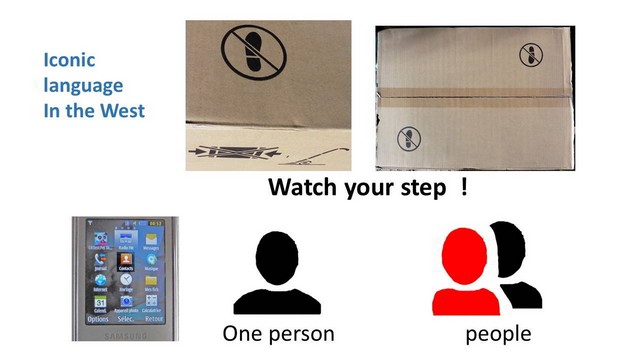 In the Western World Iconic language
is used in signage.
The Cardboard box in which my
electrical oven was delivered a few weeks ago
carried iconic warnings,
kind of Watch your step ! !
Let’s notice that this icon does not look like
a bare foot,  but like a shoe,
whose heel does a line mark.
Another common iconic sign is the one representing ONE person.
If placed in front of this same sign, the resulting composite sign  means people.
Here, the part representing 1 person acts as a key, a component indicating
to which class of general ideas the composite sign belongs. 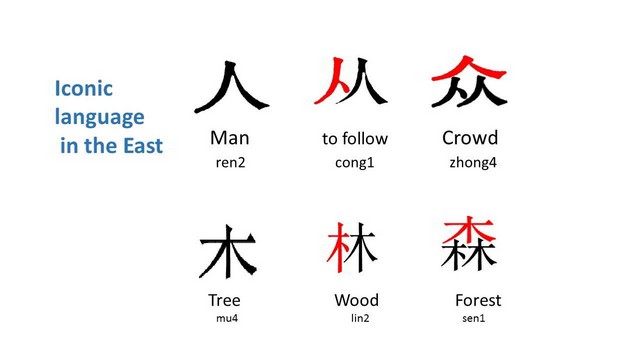 In the Eastern World, the use of iconic language is common.
For example, the Chinese pictogram showing two legs means a man,
the one with 2 men means a company: one following the other,
and with 3 men  means a crowd.
Likewise, the pictogram showing
roots/ ground level and trunk
means a tree,
the one with 2 trees means a wood, and with 3 trees means a forest. 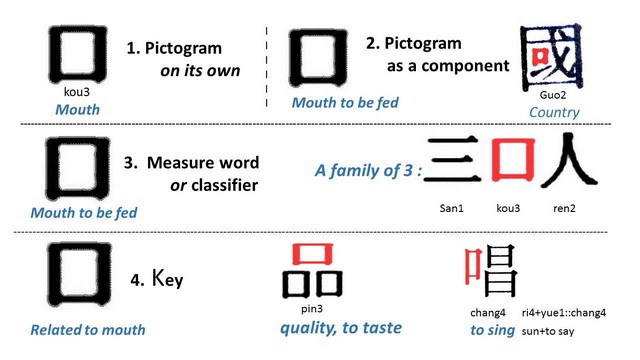 The same Chinese character may carry at times various roles:
1st as  a pictogram on its own, e.g.:
a small square means a mouth.
2nd role, as a component, e.g.:
the ideogram for country is made out of a large square
representing the country’s borders with inside halberds and mouths-to-be-fed.
3rd role,  as a measure word or classifier.
This time, the small square is specifying a man with a mouth-to-be-fed.
Taken with number 3, it means
the politically correct Chinese family...
a family of 3.
4th role, the pictogram small square is the key for things  related to mouth.
This key enhances the sense of verbs  like to taste or to sing. 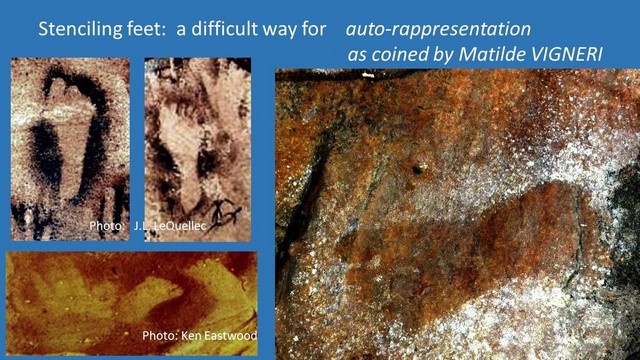 Back to Rock Art…We all know the ease with which Self-representation
has been achieved for at least forty thousands years
by stenciling one’s own hand.
In contrast, the difficulty of stenciling
one’s own foot explains the scarcity of foot-stencils.
Nevertheless, examples have been found in Africa,
@ Wadi Sora young people footprints standing next to adult’s hands,
and in Australia, @ Kakadu Nat’l Park,
2 m above ground level, a pair of baby’s feet standing next to an adult’s handprint,
and @ BradyCk the unique foot-stencil I had the chance to take a picture of. 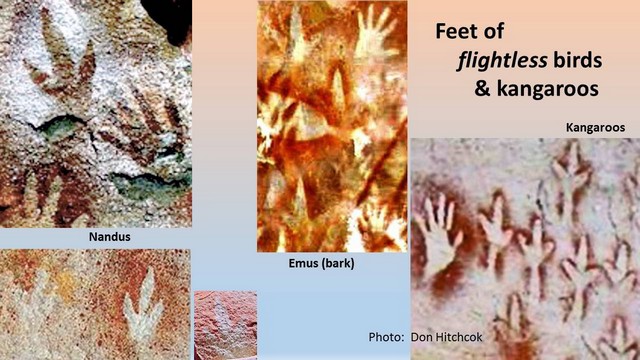 Feet of nandu, a large flightless South American bird, has been stenciled
@ la Cueva de las Manos next to an handprint.
In Australia, there are
emus in the place of nandus,
but according to Don Hitchcock,
only man-made stencils of emu’s feet have been found.
He also reported, @ Carnavon Gorge,
stencils of kangaroo’s paws next to a stenciled hand.
It might be an iconic representation of
the kangaroo’s hunter,
a kind of measure word a la Chinese. 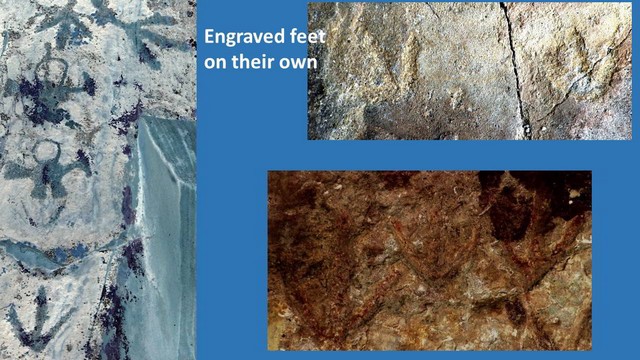 While foot-stencils are life-size, there is no way of knowing the real size of the nandus,
whose feet are represented @ Tampalaya Nat’l Park, in Argentina or
of the emus’s @The Red Lady Gallery and @ The Emu dreaming Gallery in Cape York. 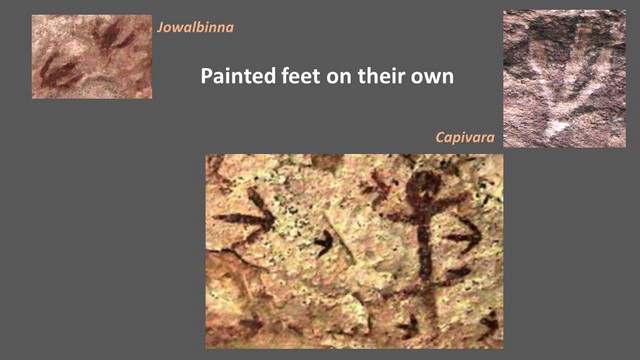 While foot-stencils are life-size,  there is no way of knowing the real size of the nandus,
whose feet are represented @ Tampalaya Nat’l Park, in Argentina or
of the emus’s @The Red Lady Gallery and @ The Emu dreaming Gallery in Cape York.
At this point, it sounds appropriate to assume that bird feet images
(stenciled, painted or engraved)
are iconic representations of birds. 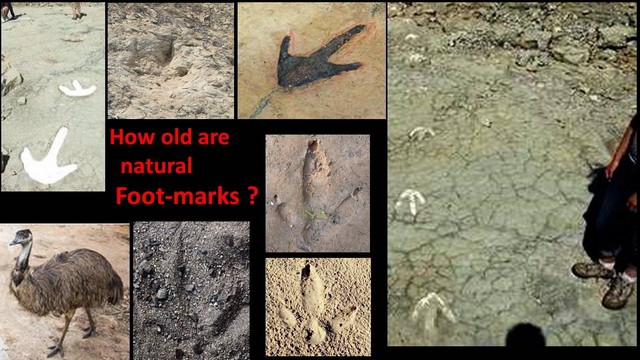 How could the image of a single footprint be used as an icon representing an animal?
Let’s note that Fossilized tracks are hardly distinguishable
from engraved ones.
This means that fossilized footmarks of dinosaurs must have been an object
of respectful curiosity as well as a very strong emulation.
Short-lived footprints left in mud or wet sand by all kinds of animals are abundant in nature,
such as this emu foot-print in gravel.
To summarize,
I would say that the most salient feature of a living being might well be its footprint. 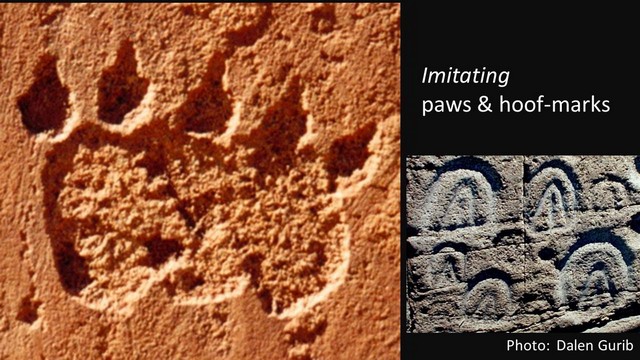 This imitation of a paw-print near Twyfelfontein in Namibia, is symbolically like
the visiting-card left by Mr. Leopard,
just like the horse’s hoof-prints @ Qiangan Obo sumu in Inner-Mongolia. 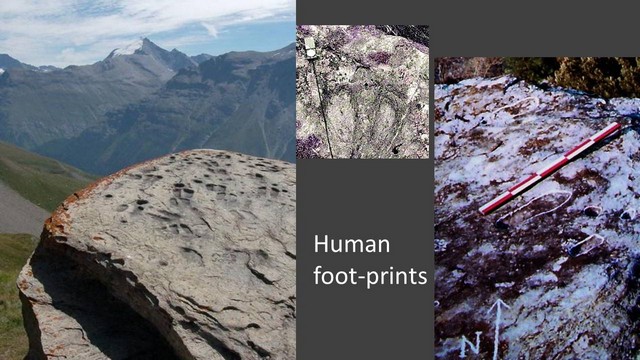 And what about engravings of detached human footprints ?….
In La Vanoise Alps, 2’270 m.o.s.l.,
let’s wonder at those deeply engraved
pairs of footprints.
They contrast with this single pair
near Grimentz, in Wallis and
this standing alone footprint near Aubrias, in Gard.
We suspect that such engraved feet
indicate lookouts for observing sunrise at solstice. 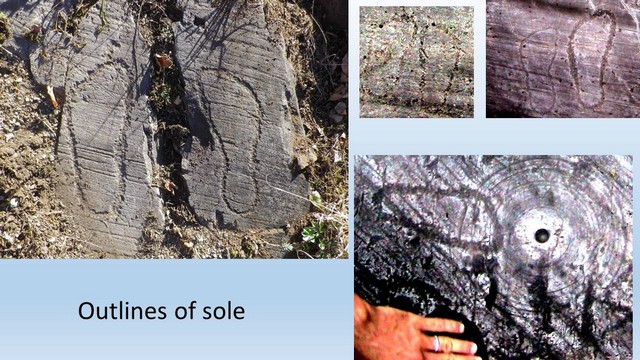 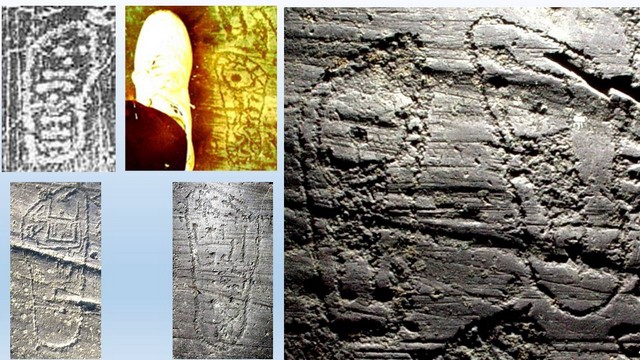 Some of those outlines are even decorated with anthropomorphic figures, and others,
interestingly, with the octaedris calendar.
Compared to the shoe of my 11 years old son at the time, their small sizes suggest
the use of man-made patterns out of bark. 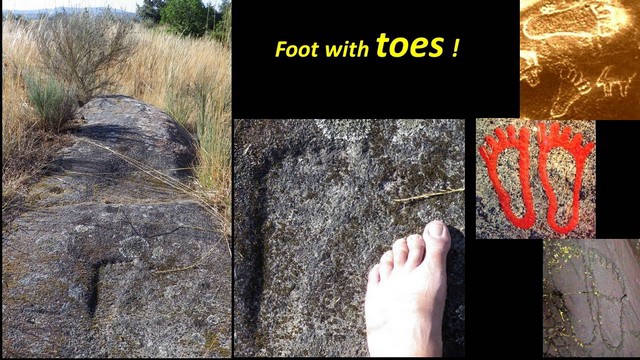 In contrast to the numerous engravings of bird's feet, engraved human feet with toes are rare,
here @ Ourense, in Galicia,
@ Spee tay tiga in Afghanistan,
@ Listleby in Sweden
and @ Foppe di Nadro in Italy.
Their size looks realistic. 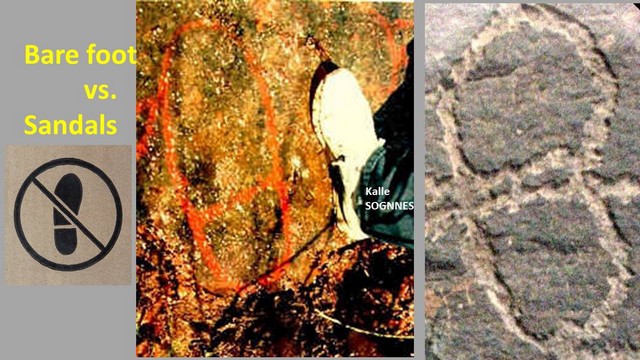 We have seen in the introduction, that modern signage uses for this purpose the line of the heel.
Here @ Lerfall near Trondheim, in this engraving of a giant clog-print,
it is the lace under the sole which appears as the distinctive sign for sandal.
On this shot,  as a gauge for the size of the glyph, I captured also the clog of our colleague Kalle Sognnes.
To the right, this glyph deserves a closer examination 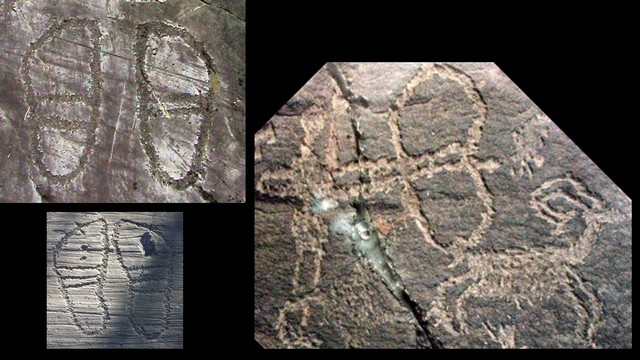 In this Mongolian engraving, the poorly shaped figure of a bow was misleading us.
On the contrary, @ Foppe di Nadro, in Valcamonica,
numerous engravings represent unambiguously pairs of sandals. 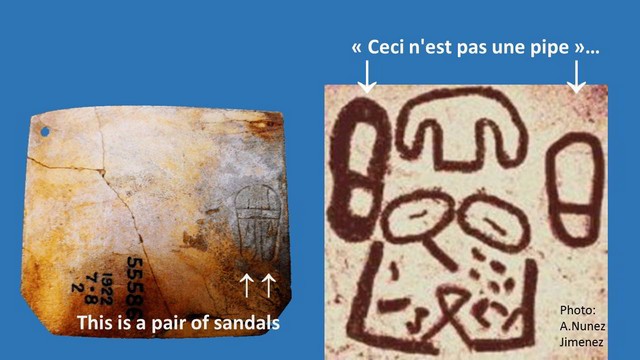 This 5’000 years old label made of hippopotamus ivory carries a glyph and this glyph  is iconic:
it just looks like the sandals of Pharaoh‘s Den to which this label was attached.
On the contrary, in the pictography on the right,
the sandal-prints stand for the ears of a shaman...
Antonio Nunez Jimenez qualified this weird piece of Rock Art de una figura interesantisima.
In this painted composition @ La Cueva de Pichardo in Cuba,
the icons of several items stand for something else, calling to mind not one,
but several ideas. It is what I call  iconical graphemes . 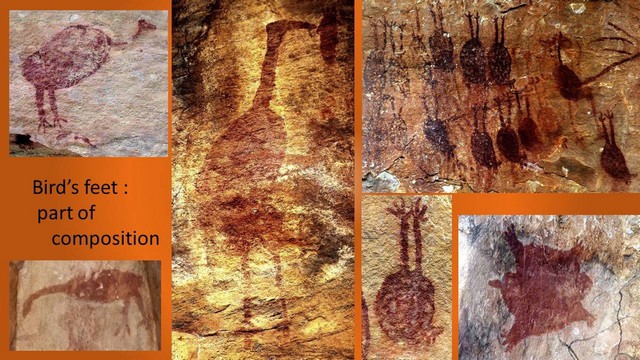 The carefully painted feet of those animals are
providing redundancy to their overall representation, just like keys in Chinese characters.
@ Capivara, there are nandus with feet & toes, and,
@ Jowalbinna, emus, black-storks, hanging flying-foxes with a reduced number of toes,
and even of sugar-gliders with feet & toes. 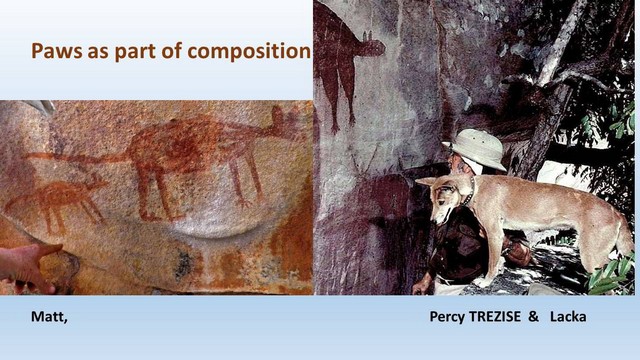 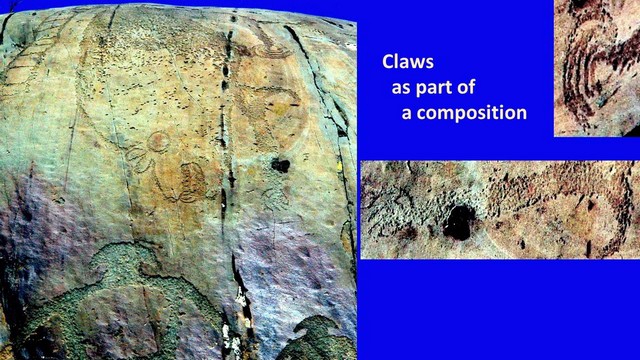 @ Gorny-Altaï,  next to the engraving of a ladder,
cropping up from the top of a huge rock,
this bear is stretching its devastating claws toward a group of anthropomorphs.
On the right blow-ups of the rear and front claws. 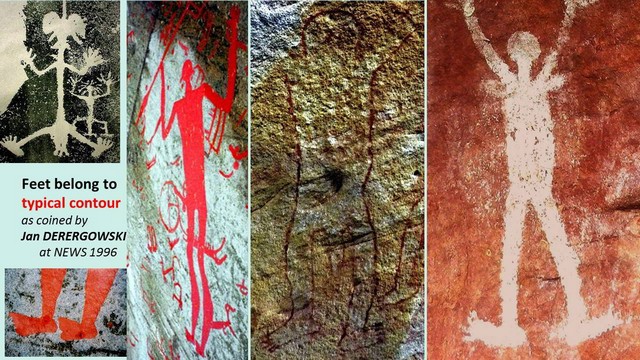 Human feet-&-toes with oversized heel may also be part of larger compositions.
They illustrate what Jan Deregowski calls « Typical contour".
@ Helanshan, the soles are attached to the tip of the legs.
@ Listebly, two left feet are attached  to the sturdy calves of the hunter.
@ Emu Dreaming Gallery, the man is represented in front-view,
while the big toes belong to feet in back-view,
just like the big toes of the young lady @ Yam Camp Gallery with her breast in front-view.
In all those cases, the icon Feet-&-toes appears as an essential attribute,
a kind of key specifying bipeds. 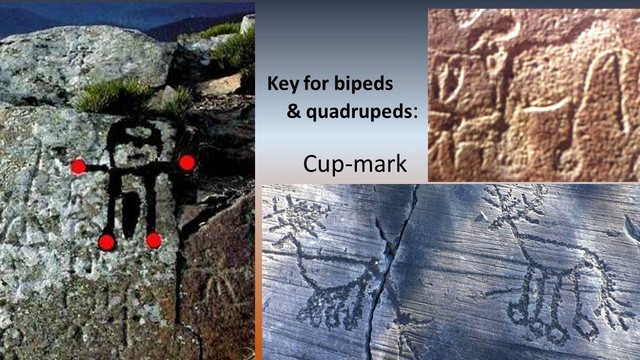 A cup-mark may call to mind the imprint of a foot on sand or snow.
Hanging at the tip of a limb, it acts as a key for bipeds and quadrupeds.
@ La Gardette such cup-marks are pendant at the limbs of anthropomorphs (blow-up).
@ Twyfelfontein  at the legs of an Elephant,
and  @  Zurla at the legs of deers.
By the way, the glyph representing the woods of those cervidae
from iconic is transformed into an iconical grapheme -
a clone of their woods is transplanted as a substitute for their tails. 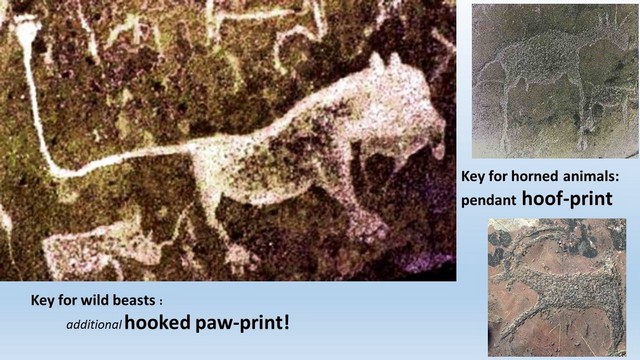 The key for a ferocious beast, such as the Lion of Twyfelfontein,
is his visiting-card, the imprint of his paw.
An additional paw-print is even transformed into an iconical grapheme and dominates the whole glyph.
On the right, the pendant hoof-print of those horned animals
significantly lengthen their legs  @ Twyfelfontein and Gorny  Altaï. 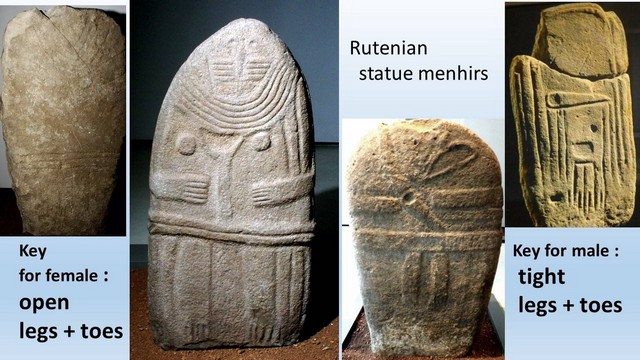 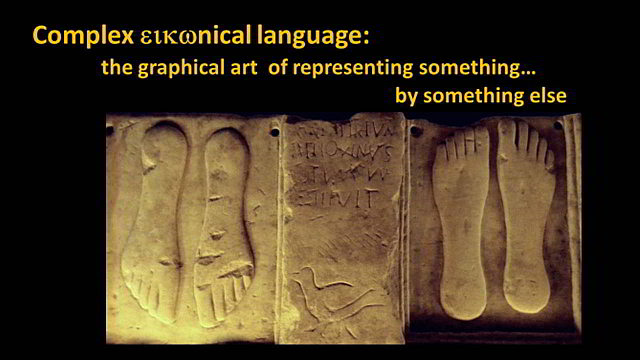 Itus et Reditus, Ida y Vuelta, as one would say in this country.
This 3rd century votive stele to Goddess Caelestis for a safe round-trip
leads us to the conclusion of our pictorial atlas:
The concept of keys & measure words still used in Chinese
shed a new light on foot images in Rock Art.    And those images ranging
from man-made clones of dinosaurs foot-prints to man-made sandal-prints
are showing up as instrumental to an early quest of humankind…
the quest for a Complex eikonical language
not only able to represent something by something looking alike, namely icons,
but also,  at other times, by something calling to mind,
namely iconical graphemes, in other words,
the crucial step toward Writing.