Mythogram
of the Raised Arm Man

"Man is a Difficult Beast to Draw", under this title,
at the IFRAO Conference NEWS’96,
Deregowski, introduced the stimulating concept of «typical contour».
This concept is most useful to understand what could be seen as
prehistorical school of painting», i.e.: the Gravettians Venuses
in the caves of Pech-Merle and Cussac.
Those caves are apart, as the crow flies, by about 50 km.
Those faceless Nurturers have surprinsingly
similar typical contour, 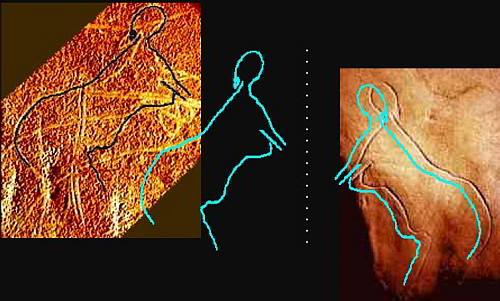 despite mirror image, and different techniques used,
such as mud scratching and rock engraving

In more recent times, the stereotyped attitude of the Neolithical
female prayers or dancers are found in several rock art sites, 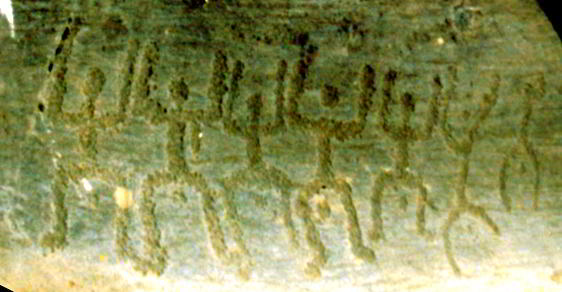 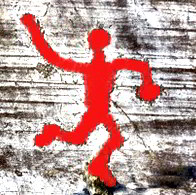 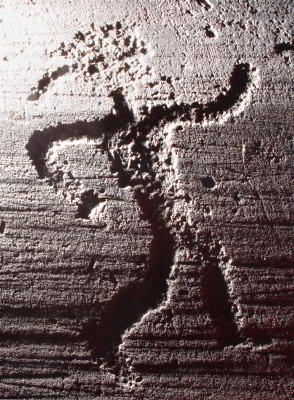 In those scenes, there is no threat or domination signal
despite their raised arms.

Now comes the question of
What are actually the attributes of a male chief ?
At the 2nd Congress of Rupestrian Archaeology, 1997, with Luc Joly we suggested
“orthogonality” might be such an attribute.

At the open air rock art site of La Gardette sur Cèze,
the anthropomorphic figures, all males, have their axis of symmetry
aligned with the shadow of a stick on sunrise at winter’ solstice.
A way, maybe, of expressing this great chief feeling of
“heading the sun off”,
and commanding it to retrace its steps toward North.

is the man with a twisted spear, at Listleby (Bohusland, Sweden).
On the plane surface of this rock the complete set
of a male hunter’s attributes is represented:
The trunk, arms and head are depicted facing us. 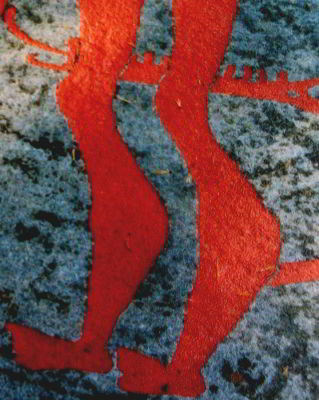 A top-view is chosen for the two strong left feet,
recognizable through their big toe,
the powerful calves are profiled from the left side,

the raised right arm with the twisted spear,
pointing maybe toward the Big Dipper
(the Great Bear) to keep control of his direction, 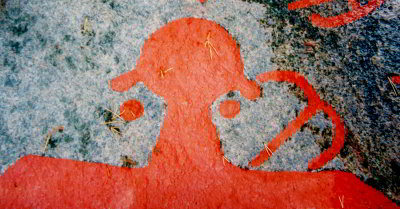 the scrutinizing eyes, and the ears kept open, 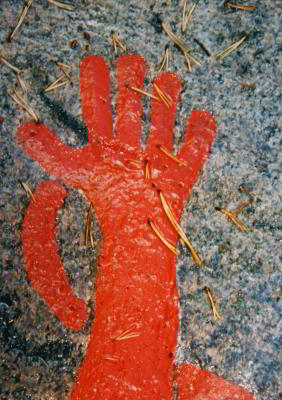 and finally the left arm raised
with strechted fingers toward the sky crowning the dominating chief.


This engraving of a Raised Arm Man is actually a
mythogramme, as coined by Leroi-Gourhan
depicting the Superiority of the Chief over all Others . 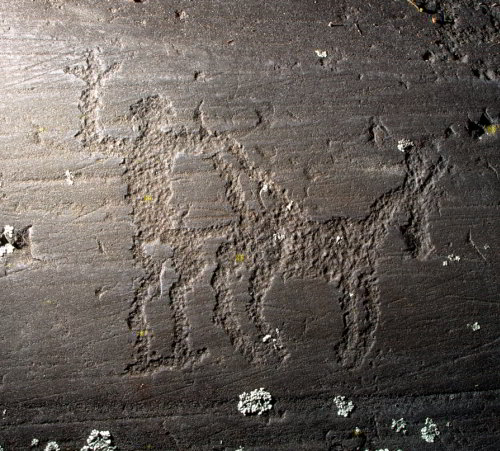 At the 1st Symposium Valcamonica’68,
Raymond Christinger presented his analysis of the
astonishing zoophilic scene at Coren del Valento. 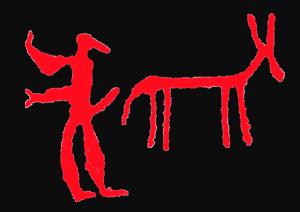 In fact, a somewhat similar scene
has been found in Bohusland, at Kallsängen.

Christinger detected the representation of a chief,
with three fingers stretched out
as trying to call the sky to witness.
Those pointing fingers are alike those of a proto-Neptunian trident
crowning the chief while he has intercourse with his mare or she-ass.

At the Levant, with the first imperial conquests,
the mythogramme of the raised arm  man
has co-existed with early forms of “literate” writing,
and will remain nearly unchanged for three millennia. 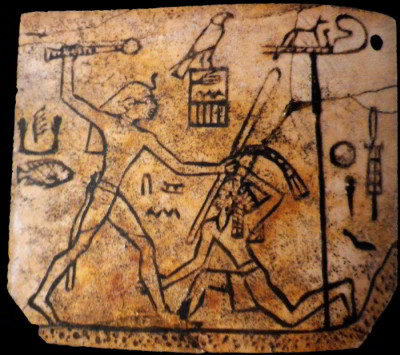 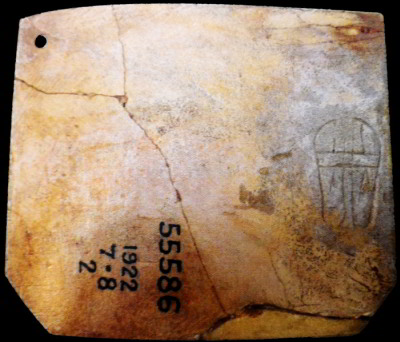 In the 1st Dynasty, the hippopotamus ivory label of
Pharaoh Den's  sandal
is its first dated show piece (McGregor 1922).
Let's note that Pharaoh Den is represented bare foot !
This scene was composed some 1500 years before
the open air Rock art scene at Coren del Valento.
We see the typical contour of the Pharaoh,
viewed from his right hand side, except for the trunk facing us.
His royal attributes are an oxtail at the belt holding his pagne,
the uraeus adorning his head-dress,
a pear-shaped club in his raised right hand, ready to massacre an enemy
(here we have the stereotyped representation of an Asiatic,
with a thick long tress and pointed beard). 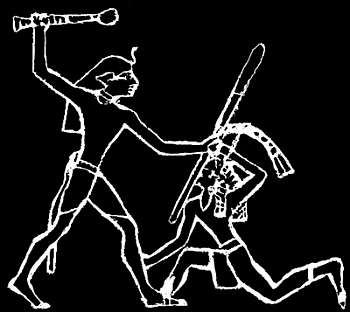 The Pharaoh grab with his left hand,
not the tail of his mare like the chief at Coren del Valento,
but the mane of his captive,
while holding with the same hand some weapons.

The most well-known representation of the
«Canon of the Superiority of the Chief»
is a little posterior to the label of Den's sandal, 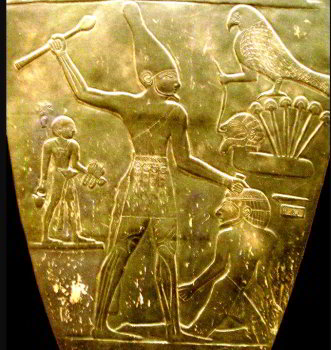 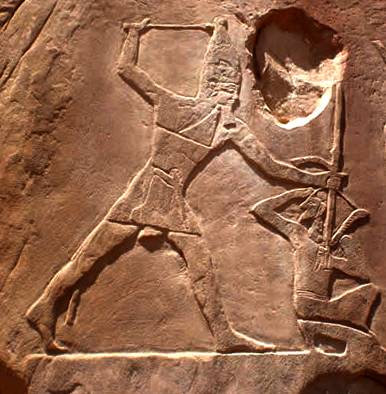 In the 3rd Dynasty, raised arm pharaoh Sekhemkhet
appeared also in Rock art in the Sinaï.

In the 4th Dynasty, the depicted raised arm pharaoh
(in Sahara, near Dakhla) is probably Djedefre,
the one who lent his face to the Sphinx of Giza. 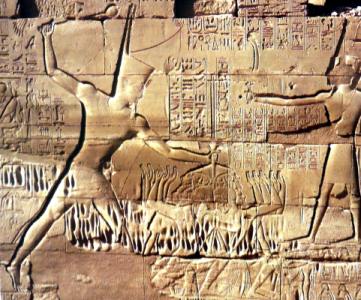 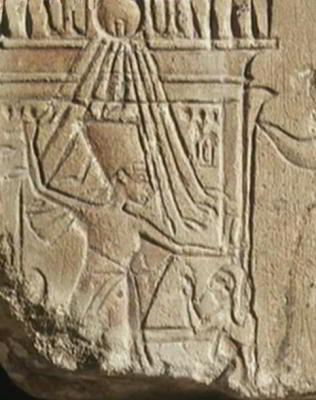 In the 18th Dynasty, after King Thoutmosis I,
the raised arm man, this time, is a woman : Queen Nefertiti !

According to Julian Jaynes,
it is toward -1250 that appeared Narratization.
Instead of timeless emphatic declarations,
time-consciousness allowed one to say a myth.
And this, without doubts,
represents the most serious challenger to mythograms.
Nevertheless, thanks to its universal readability,
the mythogramme remained attractive.

In the 19th Dynasty, Ramses II
is still represented just as Den and Narmer were . 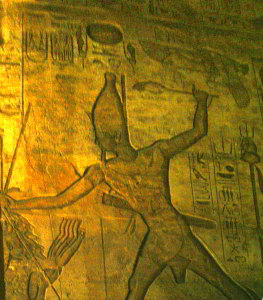 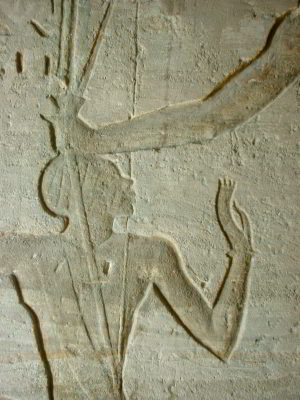 Better than words, the mythogram of the superiority of the Chief
allowed the Pharaoh to dodge more easily the hard facts
about battles, such as the one of Qadesh. 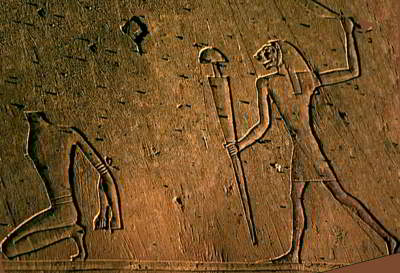 More than half a millennium later, ca. -700,
during the 26th Dynasty, despite Egyptian conservatism,
variations in the iconography are noticeable, 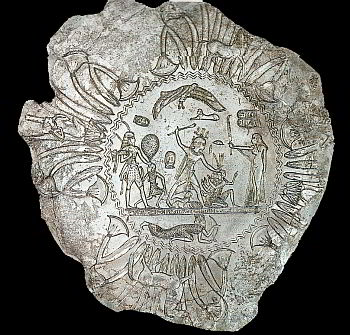 while, in the Egyptian sphere of  influence,
the mythogram substrate changed,
from the Pharaonic bas-relief
to silver patella (patère).

Samples have been found all around the Mediterranean sea.

Here, a close-up of those patellae reminding the
taste of the Phoenician-Punic for Egyptianizing décor. 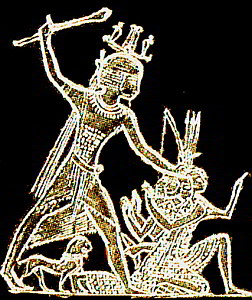 Well beyond pre-literate societies, replications of
the mythogram of the superiority of the Chief
remained faithful to the
typical contour of a man with raised arm.