THE RIDDLE OF THE PROTECTIVE CRESCENT
IN PUNIC VOTIVE ART

This report discusses an astral event which sheds new light on
the Riddle of the Protective Crescent in Punic Votive Art,
as well as on the promotion of the Goddess Tanit.
While in our recent publication [1] on Punic stelae we assumed
the beginning of the major changes in religious beliefs in Carthage occurred
"around - 450", we now favour a backward shift by 12 years.
It is well known that religious life may be conditioned by natural events seen
as dedicated signs from the divinity. It is less acknowledged, though,
that priesthood with the ability to predict natural events might
have taken advantage of such science to launch "religious" revolutions.

The year - 462 opened in Carthage a 317 - year long period which deserves
to be called "the protective crescent avatar" (see Fig. 1).

In the Phoenico-Punic world, prior to - 462, the "receptive crescent",
in the representation of the "sun-moon couple" symbol, cohabits
with the "protective crescent", while after - 462, the "disc and crescent" symbol,
on the votive stelae of Carthage & Motya, is found to have been engraved systematically
with the crescent in the protective position.
Indeed, Carla Del Vais [2] lists only eight stelae in Motya
which form exceptions to this rule.
The protective crescent avatar however was brutally put to an end with the Roman take-over,
and the definitive establishment of their "ideologically correct" arrangement:
the solar disc "dominating" the lunar crescent. A patriarchal symbol was born.
Jules Toutain [3] gave the first comprehensive description of this astral symbol in North Africa.

The moon is the matrilineal symbol par excellence as full-moon
provides the basic timing for the menstrual cycle.
The moon is also an object of fascination and worship.
Let us note that over our heads the moon-crescent does not always appear
vertical as the letter "C", but may be seen to lie horizontally,
at times either up or down, that is, in the protective or the receptive position.
It is indeed in this more symbolic way that the crescent
appears in Punic jewellery and votive art.

A puzzling collection of pre-Punic symbols carved on a Phoenician seal is shown in Fig. 2. 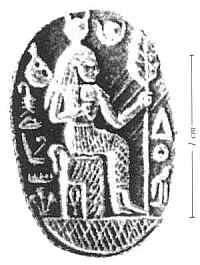 According to Eric Gubel [4], this seal, found in Sardinia, dates back to about 600 BC.
The symbol "disc-on-crescent" sits just next to the "disc-between-the-horns"
symbol crowning the Goddess’ head.
This composition underlines the very strong "family ties" between these two matrilineal symbols.

Fig. 3 shows the "tactigramme" of a fragment of an anepigraphic stele
which my great-grand father, Jean Spiro, did not take the trouble to register
in the Corpus Inscriptionum Semiticarum. 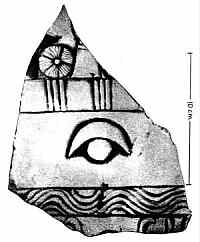 Fond of its astral symbol, my father used to refer to this stele
as "the Apron of  Tanit collecting the sun" and positioned it in his practice
with its crescent in the receptive position. Therefore, for fifty years,
I saw this stele turned up-side-dawn !
It took me the same period of time to invent "tactigraphy",
my stamping method based on advanced paper & laser-copying technologies [5],
and hence to be able to identify on this stele the remaining bits of Tanit ’s hands and head.

In Carthage, as the use of the compass became mastered aver the years,
the symbol of the protective crescent was engraved a votive stele with an increasing skill.
A standard solution was to take for R, the radius of the crescent,
a multiple of D, the diameter of the disc and to vary
the position of the centre of rotation. Fig. 4a depicts the result when R is taken equal to D. 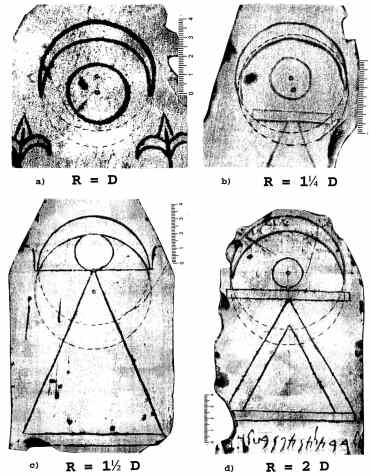 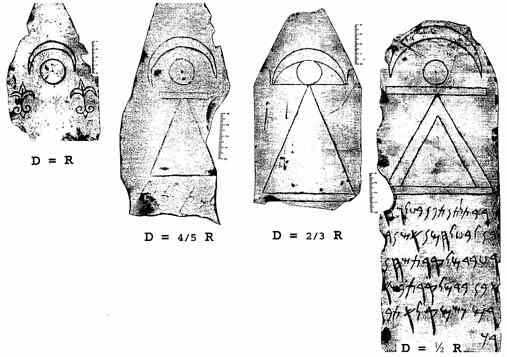 Obviously the appearance is strongly influenced
by parameters such as R and D.

To round up this selection of tactigrammes with protective crescents,
Fig. 6 shows an interesting solution with the sun disc
de-coupled from Tanit ’s head. 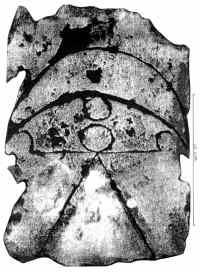 I now turn to the religious roots of this astral symbol.
The meeting of the new moon with the sun at intervals gives rise to solar eclipses,
and I believe that such dramatic events played an exceedingly important role in past religious life.
Bronze age tribes in Valcamonica seem already to have attempted
to record such an event by means of rock engraving.
Much more recently, at the beginning of the XVth century,
the city of Grandson (Switzerland) was granted its freedom,
and it may well be that this city choose its seal with the "sun-above-moon"
just after the nearly total solar eclipse (99 % shielding) which took place at
6 o’clock in the morning of April 7th, 1415.

What about eclipses over Carthage ?
Twenty years ago, some participants to this Conference might remember,
on April 29th, 1976, at 11:10, there was a sun-above-moon solar eclipse
with a magnitude of  81% shielding.

To be instrumental for the introduction of a new cult,
natural events must be predicted with some accuracy.
In the case of eclipses, some researchers believe that the Mesopotamian
had already recognised the existence of the "Saros",
an 18 year long eclipse cycle of 223 lunations,
or 6’585 days and 8 hours.
It is said that the Carian proto-astronomer Thales became well-known at the age of 40,
for having predicted a solar eclipse, most probably the one, nearly total,
of late afternoon May 28th, - 584 (Julian day 1 507900).
This view is contested by Neugebauer [7] who denies Thales could have made such a prediction
and even states that no solar eclipses could be predicted to be visible in Asia Minor
until three centuries after Thales. In any case, at the age of 22, Thales had a stroke of luck:
the shadow zone of the eclipse preceding the one of - 584
had a nearly 20 degrees longitude overlap with this later one,
thereby including Miletos (N37.5°, E27.3°).
Therefore, he might have observed the barely noticeable
morning solar eclipse (with only about 50% shielding) which took place on May l8th, - 602.

For the prediction of the solar eclipse over Carthage on April 30th, - 462,
if one assumes, in contradiction to Neugebauer,
that the Saros cycle was known one century after Thales,
then, one can also guess that the Punic proto-astronomers had heard about the total solar eclipse
which occurred 223 lunation earlier over the mouth of the
Yangtze River (Shanghai: N31.5°, E121.5°), on April 20th, - 480.
According to Fr. Gaubil, this eclipse is the 35th one recorded
in the Chinese Annals (started in - 708).

Furthermore, Phoenician-like polychrome glass beads found in Chinese tombs
of this epoch tend to suggest early contacts between the Chinese and the Phoenico-Punic world.
According to Nobuhiro Yoshida [8], even "transoceanic immigration was possible
in prehistoric ages beyond our imagination".

An alternative basis for the conjectured prediction would be the 669 lunation's cycle.
This triple Saros cycle was certainly known by the Babylonians of the IIIrd century BCE,
but, of course, we do not know for sure if it was already known
in the Phoenico-Punic world at the end of the VIth century.
On March 28th, - 516 (Julian day 1 532676), the solar eclipse was,
with only 61 % shielding, just visible over Carthage,
but must have been seen more clearly, half an hour later,
over Tyre (N33.2°, E35.2°), where the shielding factor was 82 %.

The trajectories of solar eclipses were calculated by hand last century by von Oppolzer,
and published in 1887 in his famous "Canon der Finsternisse" [9].
In Fig. 7 we can see how, after a Saros cycle, the shadow zone shifts towards West and North. 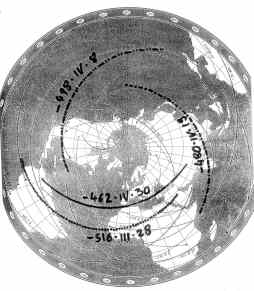 Fig. 7: "Oppolzer' trajectories": the total solar eclipse of -462 and the three previous ones [7]

The uncertainties in calculating ancient solar eclipses are due to the incompletely known
changes in the rotation of the earth which tends to slow down.
For the - 462 eclipse, it may be that the given local time of occurrence
might be off by as much as one hour, while its maximum magnitude
should be given as 98 % plus or minus 2 %.

Of course, during a solar eclipse, there is a solar-crescent (see Fig. 8) 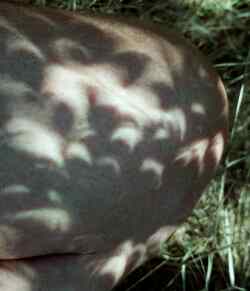 Fig. 8 : "Solar crescent" observed  on skin through foliage  during a solar eclipse

and a moon-disc, but the least one can say is that such a subtlety seems
to have "blinded" the ancient observers.

Conclusion: The total solar eclipse over Carthage of April 30th, - 462,
is conjectured to have been predicted by the Punic proto-astronomers
and to represent a major event in archaeoastronomy.
This astral event might also be suspected to have been used by Carthage
as the welcome pretext (that is it usefully conformed to the City’s founding myths)
to justify the annexation of the hinterland [1] and to gear deep religious changes
such as the promotion of the Goddess Tanit and her Protective Crescent.

I am much indebted to Jean Meeus (Erps-Kwerps, B) and Göran Hellström (Lund, S) for their most precious collaboration in calculating the detailed features of the solar eclipses reported here.