The mountain repelling the sun

The invention of the 365 ¼ day calendar probably coincides
with the origin of the scientific way of thinking:
it should indeed have significantly facilitated the discovery of
the "primal causality", i.e. the recognition of biological fatherhood.

The invention of the solar calendar is relatively recent, dating only from 5'200 BP.
On December 21st 1969 Michael J. O’Kelly first interpreted a trace,
in the corridor of the megalithic monument of Newgrange,
of the search of a "zero of time",
in order to count the number of the days of the solar year.

A cultural activity of this kind surpassed the insular context,
quite fortuitous, of this discovery.
According to our observations during the 1998 winter solstice
we assume that two elevated sites of rupestrian art
decorated with kinds of sight-line or "alidad" -
to be further evidence of this quest.

1) The site called « La Gardette », is an erosion resistant outcropping of gneiss
located on an hilltop at 835m,
in Hte Cèzarenque (near Aujac, in the Cevennes, France:
N 44°21'40", E 4°01'34"). Its tilt of 25° faces S-E, i.e.; 135°N,
and its engraved surface (4m x 4m) contains some thirty male anthropomorphs.
At dawn of the winter solstice, the lighting of the engravings from below
creates the illusion of inversion of relief (see Fig. 1),
and the projected shadow of a plumb-line
confirms the deliberate orientation of the engraving's axis. 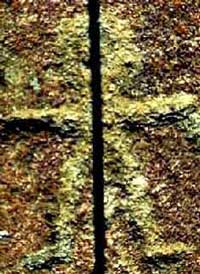 While rising at dawn of the winter solstice,
the solar orb follows closely the crest of "La Loubière",
whose summit (881 m) overlooks by 2,4° the horizon
seen from La Gardette (see Fig 2).
The sun half-points out above the horizon-line
at 8:19 local time (7:35 solar time),
and reach the top of the hill an hour later. 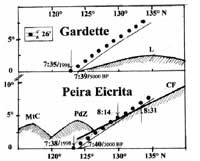 2) The site called « La Peira Eicrita di San Germano Chisone »,
is a gneiss monolith
with a nearly flat engraved area of 130 x 75 cm,
located on a salient of La Comba Farina in the Cotiennes Alps
(N 44° 53' 20" / E 7°14' 08").
The petroglyphs form a monumental composition:
3 solar symbols (circular with a central dot),
connected to an eye-like sign are recognisable,
converging on a reticule, several little cups,
on the side, an worshipper, and,
particularly striking (but probably of later incision),
a swastika oriented along the cardinal points.
One of the solar symbols is oriented toward 135°N (see Fig.3).
Seen from La Peira Eicrita, the solar orb during its rise follows
the crest of La Comba Fossate whose summit (650m) overlooks the horizon by 12°.
In the background on the left, see Fig. 2,
one can distinguish the "Sugar loaf" (721m) and the Mt Craviate (787m). 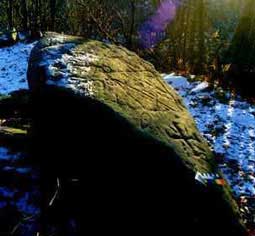 We conclude that the orientation of the engravings
at La Gardette and at La Peira Eicrita
reveal within neolithic humanity a sense of observation
which merits the term scientific.
On the other hand, the siting of those astronomical observatories
is also marked by a magical way of thinking:
the presentation suggests that the "solstitial reversal"
takes place at those very sites:
the mountain repelling the sun.