We review several aspect of the human perception of solar eclipses, total & annular, in ancient & pre-historical Art, in China & other places .
Several candidates for representation of solar eclipses are compared with the various actual appearances of this natural phenomenon. Finally, attempts of dating such Rock Art, with engraved drawings representing an eclipsed Sun, are presented. We discuss errors resulting from the use of methods based on celestial mechanics for dating pre-historical solar eclipses.

For an odd-looking piece of Rock Art engraving, in order to identify it, as a depiction of a solar eclipse, and,
to date it, by scanning all the retro-predicted candidates, a kind of qualified guessing appears as a promising method.

I.       A data set of well documented naked eyes observations of solar eclipses

i)   to comfort ancient records of solar eclipses,
ii)  to provide a compatibility criterion to select candidates.

Some examples of lithic engravings possibly depicting a solar eclipse will be discussed.

As everyone should know, the observation of the sun with naked eyes might induce very severe ophthalmologic problems (though, the amount of light of the eclipsed sun, during totality, is no more than the one of the full moon).  In fact, we do not know how many people have lost their vision (totally or only partially) in the past.

During totality, bright stars are becoming visible. While naked eyes observation of a total solar eclipse is straightforward, equivalent photographic imaging requests radial filtering or the processing of a composite out of the shots taken with varying exposures.  Christian Viladrich (Institut d'Astrophysique de Paris) built such a computer assisted mosaic out of  8 shots he took on 26. Febr. 1998 of the eclipse over the Guadeloupe Island, which can be downloaded (590 Ko). On this amazing picture, the lunar disk, lighted by earthshine, has been enhanced and the magnitude of the stars is indicated.

In favourable conditions, as one of us (S. K.) experienced in Nejapa (Mexico) during the total solar eclipse of March 7th, 1970, the structure of the corona can be observed with naked eyes, up to a distance from the centre of 6 solar radii. Various reports, old engravings, recent sketches and photographic pictures, all testify for the unsurpassed dynamical range of naked eyes observations. E.g.: 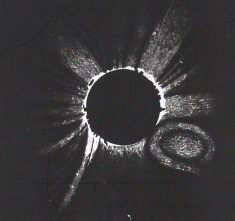 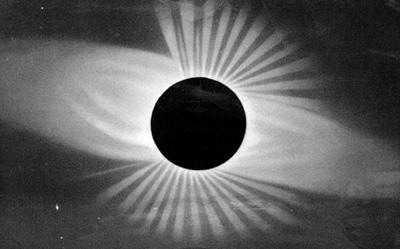 One of us (SK) did visually observe the corona during the 7 minutes long totality of this eclipse.
He observed the two simultaneous small chromospheric bright features (near both the 2nd and 3rd contact)
and the coronal structures, i.e.: the so-called helmet streamers and the long streamers with open stalk.
The length of those streamers estimated visually exceeded  l.5 solar diameter,
i.e., as long as, or even longer than, the length seen on the photographic picture. 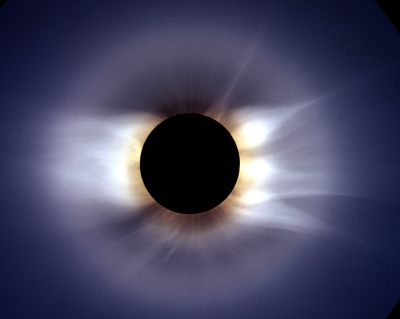 B. Filippov testified that his photo represents adequately what he saw with naked eyes,
up to a distance from the sun of at least one solar diameter.
H. Tanabe & H. Shibayama, with 4 other contributors, took part in an experiment "Sketches of the Solar Corona" in real time.
Those 3 pictures illustrate well the differences between photographic and eye-brain system recordings. 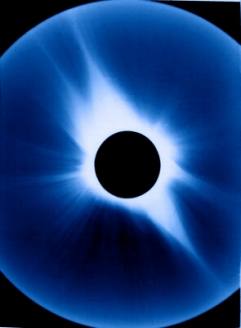 During annular eclipses, with over 96% shadowing of the sun, the blinding danger is somewhat reduced
(particularly if only a reflected image on a water surface is looked at), compared with full direct sunlight.
Annular eclipses do not allow the observation of the solar corona, but such events remain impressive. 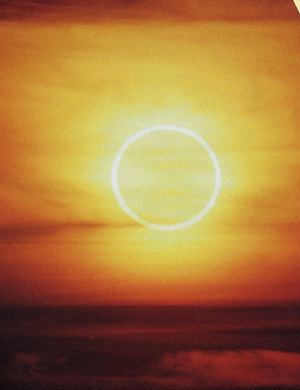 The retro-prediction of ancient solar eclipses is bound with the understanding of the slowing down of the Secular Rotation Rate of the Earth,
and has been reviewed in-depth by  F. R. Stephenson, in Historical Eclipses and Earth's Rotation, Cambridge Univ. Press 1997 .

Several Computerised Canons of Eclipses are available, but only some allow the user to "fine tune" the so-called D T,
the difference between Universal Time based on Earth rotation and Atomic Time. We used here the "freeware":
EMAPWIN of Shinobu Takesako.

The procedure is as follow:
One selects the observation site of his choice by giving in its longitude and latitude, and a starting date.
Then, on the built-in map, one scans the trajectories of all eclipses and selects the relevant ones
(in this process, the programme assumes a certain deceleration of the Earth).
Now, if one suppose that, at a given date, the eclipse has been maximum at this location,
one should try to optimised the  D T. One is left with the following data :
date and time / magnitude and duration / D T

In order to test a retro-projection model, it is primordial to have access to a large
reference data set of  historically reliable solar eclipses.
Computerised Canon of Eclipses, such as EMAPWIN, list all eclipses which occurred in the past, but
how to evaluate the reliability of the record of the observation of an ancient eclipse ?
The specialised literature and the web are spammed with "records" of eclipses,
suggested by insufficiently qualified linguists (e.g.: the so-called Ugarit eclipse),
or, as we will see, eclipses whose argued sites of observation contradict the analysis of the reference data set.
In our opinion, this reliable reference data set can only be
(a critical selection of the eclipses reported in) the Chinese Annals.

Let us note that, even if one knows (or guesses) from a written record the site of observation,
the time span to be considered for the occurrence of an eclipse might be large.
It can reach several centuries,
e.g.: one Shang turtle bone oracle, excavated in Xiaotun near Anyang (Henan) in the nineteen-forties,

has been discussed in 1989 by Xu Zhentao, K.K. Yau & F. Richard Stephenson, in Archaeoastronomy #14, S71.
A total solar eclipse has been guessed to be depicted here :
"three   flames (of the corona), eat   the sun, big stars (visible)",
but contradictory interpretations cannot be discarded.
In modern Chinese, one would write, according to Pang & al. :

where the semi-homophone, in pinyin: xian4 , in english : trap,
is (supposedly) substituted to flame, in Chinese :

At the time, the dating fork was given as the whole period of the Shang dynasty,
i.e.: from -1'600 to -1'050.
In the hypothesis of the description of an eclipse,
this leaves room to several candidates !
In order to document the slowing down of the Earth's Secular Rotation Rate,
Kevin D. Pang, K.K. Yau & H.H. Chou analysed Chinese records depicting solar eclipses,
in GeoResearch Forum 3-4, 1998, pp. 459-488.
In particular, Pang & al. believe to have succeeded
to date precisely the "3-flames-eclipse" as the very long one
(6 minutes), which occurred on 5 June –1301.
Unfortunately, in such a case, a control dating measurement by AMS (14C / 13C / 12C ratio) of,
properly extracted, organic carbon of the collagen of this very tortoise-shell (serial # 13.0.13510).
is not possible,
due to the custom to expose the shell to fire and consequently destroy the datable collagen

Below are listed five ancient eclipses supposedly reported in Chinese Annals, and the check we made with EMAPWIN.

Pang's finding is that :

Those results are summarised in the following graph:

In other words, Pang succeeded to formulate a criterion
to check the plausibility of ancient eclipses at a given observation site.
Nevertheless a +/- 8% represent pretty broad limits.

1.    A Swiss astronomer, W. Brunner suggested that the rock engravings in the County of Tanum (in Sweden) were depicting the same solar eclipse, The one of 23. October -1067. One could argue that the bronze age style of the engravings is compatible with an earlier date. From the design style, we would well see in those engravings the depiction of an annular eclipse, i.e. the one of 12 March -1361, though there are other eclipses compatible with Pang's criterion. 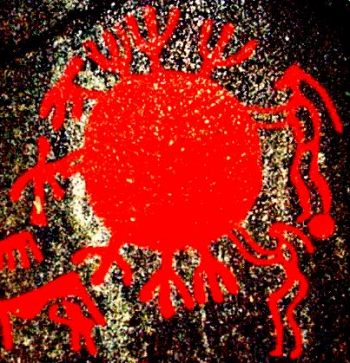 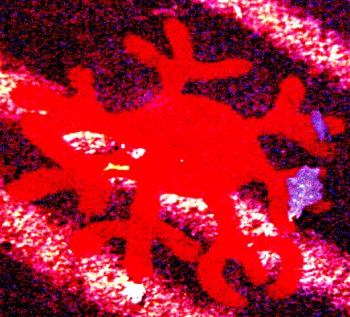 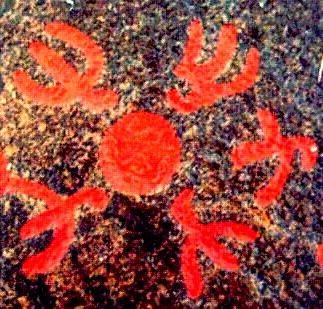 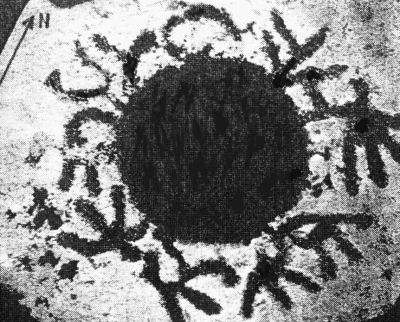 2.     The Swiss astronomer, W. Brunner suggested that the rock engravings in Carshenna (Switzerland) and Coren del Valento in Valcamonica (Italy) represent the total solar eclipse of 13 July -884. This eclipse does only marginally satisfy Pang's criterion.

In addition, it contradicts the archaeological context. The Bronze age style of those engravings call for a quite earlier date. 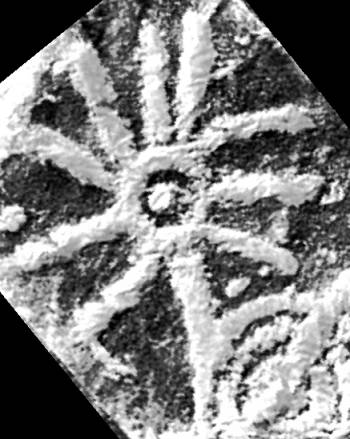 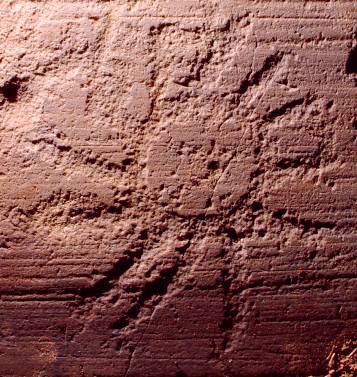 Our best alternate candidate is 15 November -1430.

Those preliminary results for dating Rock Art & lithic engravings with solar eclipses confirm our expectations in the potential of this "reverse method", where, instead of trying to date an eclipse in order to measure the slowing down of Earth rotation, one uses the values of this rate, what we call the "Pang's criterion", to establish the plausibility of the date of a solar eclipse.

Note : Since this early attempt, one of us (LD) has shown see http://www.archaeometry.org/titanic.pdf  that all reliable solar eclipse records
of World Annals  are compatible with a simple parabolic Model of the slowing down of Earth's spin .


Acknowledgement: One of us (LD) would like to thank here Dr Xu Zhentao for his kind help, and Dr K. Pang for his most useful comments on his work.