THE SWASTIKA
FROM ORIGINS THROUGH PRESENT DAYS

The perverse use by the Nazi regime of the swastika symbol under its
"clockwise gamma-like" version as a racist "arian" emblem
has occulted for nearly three generations of researchers
the scientific studies of this very old symbol.
Thanks to Fernando Coimbra, we now have a fair overview
of this symbol, clockwise as well as counterclockwise,
which obviously belongs to the heritage of the humankind.

In the 19th Century, several authors attributed different meanings to the swastika symbol:
image of the supreme god, solar symbol,
depiction of the lightning, symbol of fire,
depiction of the water,
union of the male and female sex, among others.

Whatever has been the various meanings of the swastika,
this symbol has been widely used over millennia,
being associated to the symbolic-religious world of several peoples including the Christian world.
For example, on the following Christian funerary inscription

the swastika appears first,
larger than the Chi ro – the emblem of Christ –
apparently playing, here, the prime role.

In another case it even appears as the symbol of Jesus’ heart itself . 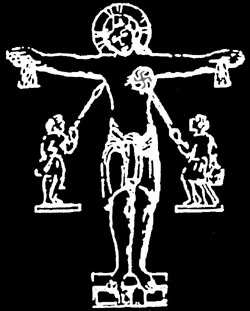 The meaning of the swastika has changed in time and space, as
its associations with elements and different objects where it was depicted. 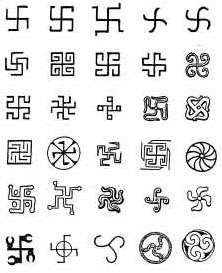 It is therefore a severe mistake to attribute - as did several researchers in the 19th Century -
a unique and same meaning to  the different kinds of swastikas, found in the different parts of the world.

The origin of the swastika is lost in the night of ages.
White racist ideologues present it as an Arian symbol,
but  such a theory doesnot hold against archaeological findings.
In Eastern Europa  were found potteries with swastikas belonging to the 6th and 5th millennia BC
and in Mesopotamia this symbol appeared on pottery from the 5th and 4th millennia BC, therefore pre-Arian artefacts.
The oldest swastika I know of is depicted on a ceramic vessel from Bylany, Bohemia and belongs
to the 6th millennium BC.

The swastika symbol took several shapes over time.
The following picture is certainly one of the most curious example: 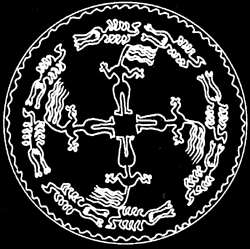 the symbol is formed by the waving hair and the bodies of four women.

The swastika symbol had an extraordinary survival, in space and in time,
having being used by so many cultures and reaching the present days.
Some might even argue that it remained deeply inside in what C. G. Jung called the "collective unconscious",
that is, the supposed part of the mind that records and conserves the psychological heritage of all mankind.

With this article, that may be considered as a small virtual exhibition,
I intend to spread examples of swastikas that demonstrate the wide diversity of meanings attributed to this symbol.
Surely each image deserves a detailed commentary,
but that would made its reading on-line tedious.
According to the proverb that says "it’s better an image than a thousand words"
follows  hereafter a "Swastika Pictorial Atlas",
i.e.: a collection of 56 figures to which I added a short caption.

back to the index of  archaeometry.org