Thin films of refractory metal oxides are very transparent.
Their autocoloration depends only of the thickness of the film,
which, in turn, is measured by spectroscopic ellipsometry.
The measurements of the voltage-dependance of the colour spectral domain of
anodised Titanium in Ammonium sulfate was archieved by us in 1992 at the
IME-Neuchâtel, and were presented in the CIE 1976 L*a*b* representation,
while, for anodised Niobium, the measurements archieved in 1990 by
Karl  Kimeswenger & J. Morawec at SILHOUETTE-Linz were presented in
the older CIE 1931 Yxy representation.
For an easier comparison between the Titanium and Niobium
we had to tilt by 45° the Yxy diagram
to have the blue-yellow axis vertical in both cases. 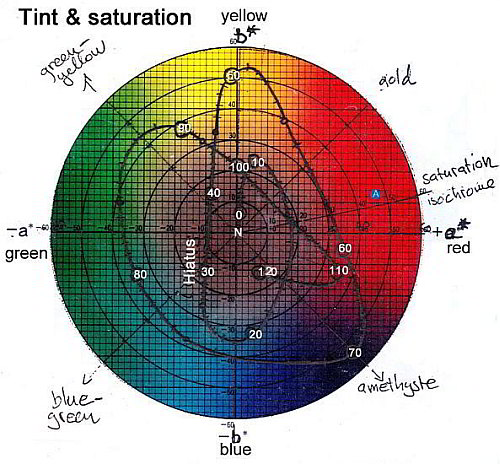 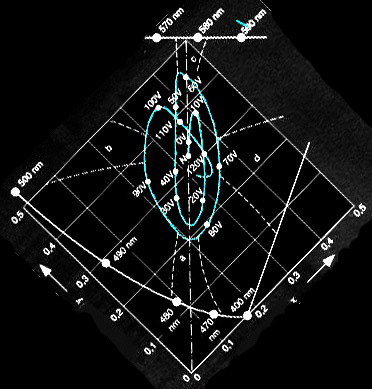 As noticed by K. Kimeswenger, due to the existence of a thin oxide unvisible layer
resulting from thermal corrosion at 300 K, the 0 V point doesnot match the
Nullpoint N of the CIE-Colordiagram, and until 10 V, where bernstein color
appears, the curve follows closely the Blue-Yellow-Axis.