The oldest photography of the Sphinx
is probably the one of Armand de Banville,
taken during winter 1863-1864

Google Earth, the tool allowing the researcher to examine
archaeological monuments in their context
(thought only under one lighting condition)
stimulated us to reopen the file "Sphinx of Giza" . 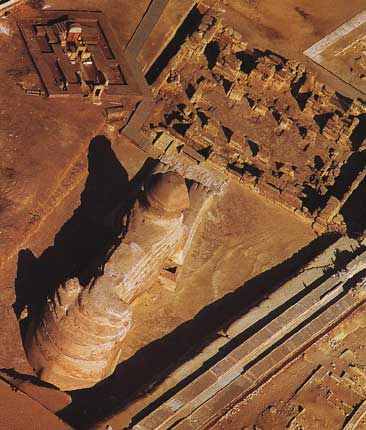 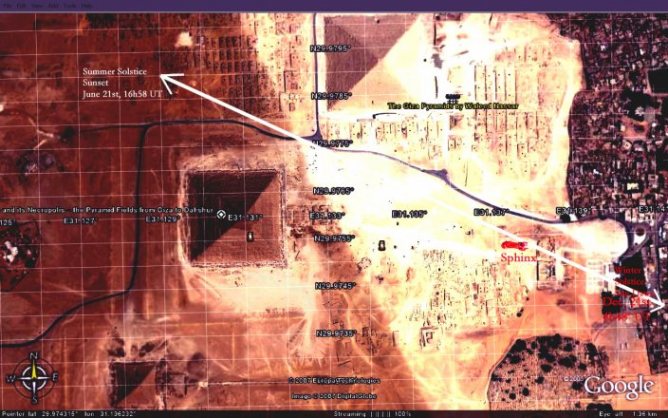 On June 21st, on Summer Solstice, the Sun is
carving in the landscape the hieroglyph akhet .
the Sun sets at 16h58 UT under the azimuth 117 + 180 = 297°
between the two largest pyramids, just behind the Sphinx,
as testifies the magnificent picture taken by Juan Antonio BELMONTE
on June 21st 2006.

As noticed by Joseph DAVIDOVITS,
(p. 67, "La nouvelle histoire des pyramides", 2004),
the giant head of the Sphinx has been carved in a hard and grey chalk piton
of the MOKKATAM formation ,
The rest of its body is sculptured into a soft chalk.

Since a decade, we know that higher up the Nile,
at Nabta Playa, 100 km West from Abu Simbel,
standing stones and menhirs have been venerated 8000 years ago. 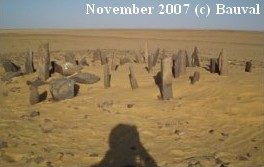 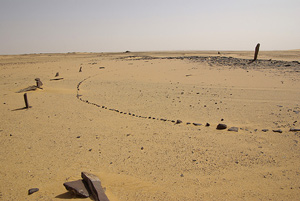 It is therefore reasonable to guess that
the piton of Giza, located at proximity of the Nile
has been venerated since the highest antiquity.
In a second step, at proximity of this cultual site,
Kheops built his pyramid,
which is aligned toward East as well.
We do not know if he could, while still alive,
start the building of the 2nd large pyramid,
(usually credited to Kephren)
in order to  inscribe AKHET over the Horizon.
In the absence of  hills, the only open option was to build the landscape...!

Then, if one examine in further details the Google-map of Giza,
it turns out that
the relative position of the pyramids has not been chosen randomly. 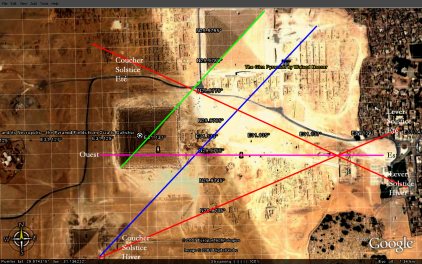 This exam leads us to the following observations:

1. The hard rock piton of Giza, (with anthropomorphic features ?),
has probably been venerated, as a giant statue-menhir.
With successive re-shapings, it became the head of the Sphinx.
This cult site would have pre-existed to the pyramids,
and would have even conditioned their setting.
The body of the Sphinx, sculpted in a soft rock,
could be of a late facture,
posterior to the erection of Kephren's pyramid.

2. The body of the Sphinx
has the same orientation "full East" ( amethyst line)
as the one of the three large pyramids. 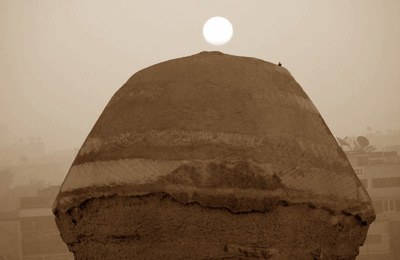 The face of the Sphinx tracks the equinoctial sunrise
as testifies for the beautiful picture taken by Juan Antonio BELMONTE
on March 21st, 2005

3. The axis NE-SO (green line) of  Khephren pyramid
is aligned along the one of  Kheops pyramid

4. The distance separating the centre of Khephren pyramid from
the one of Kheops' is such, as seen from the Sphinx,
that the sunset at Summer Solstice (higher red line )
will vanish between the two pyramids

5. The hieroglyph "akhet" might be a representation of
the pyramidal dyad Kheops-Khephren
and therefore be contemporary to the reign of Khephren .

6. The S-E corners of the three large pyramids
are aligned (blue ligne)

7.  The corners S-E of the Menkhaure pyramid is
positioned on the shadow line ( lower red line),
starting from the Sphinx, at sun rise on Summer solstice. 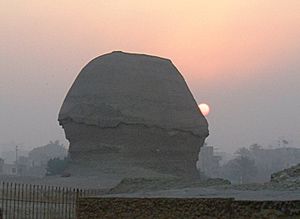 Considering the absence of intervisibility between those two points,
the positioning by sight of the SE 3rd pyramid's corner
requests the use of an intermediate pole
(a sophisticated topographic challenge for the pyramid's builders ?!!).

Let us note that in a paper entitled
"On the Orientations of Ancient Egyptian Temples",
Mosalam SHALTOUT, Juan Antonio BELMONTE & Magdi FEKRI,
summarize their findings which agree with the one presented here.
We are endebted to them for their critical comments.